Sean Halligan Posted on September 29, 2017 Posted in Uncategorized No Comments

Saratoga Biathlon Club member Curt Schreiner was inducted to the USBA Hall of Fame at the United States Biathlon Association’s annual awards and recognition dinner in Lake Placid on 9/23/17.  A 7-time National Champion and 3-time Olympic team member, Curt was recognized for his long career of accomplishments and contributions to biathlon.

Watching the biathlon at the 1980 Winter Olympic Games sparked Curt’s interest which led his family creating a biathlon range and trails on their property adjacent to the Great Sacandaga Lake.  It was there where Curt first developed his skills that led to early success at the Empire State Winter Games and selection for the World Junior Biathlon Championships.  After joining the National Guard, Curt was selected for the 1988 Winter Olympic team in his first year as a senior athlete and was a member of the 1992 and 1994 Olympic teams as well.  Maximizing the technical elements of the sport, he was perfect on the range in his first Junior World Biathlon Championship hitting all 10 of his targets.  At the 1992 Olympic Games in Albertville he shot clean in the sprint race and only missed 3 targets of the total 40 for the individual, sprint and relay races.  One of Curt’s best performances came at the 2000 CISM Games where he was one of only two competitors to hit all 20 targets in the individual race, earning him a podium finish, 6th place.  It was a unique day in that his wife & fellow Saratoga Biathlon club member Deborah Nordyke was the only other competitor who was without penalty in the women’s individual race.

After his final race at the 2003 National Guard Championships Curt was deployed to Iraq and completed his career in the military as a Major.  He continues to play an important leadership role in the New York biathlon program; hosting races, coaching high school and managing the club’s biathlon site at the property where he began his participation in the sport.

Curt’s induction will be recognized with a bronze plaque at the USBA office and a short biography of Curt on the Hall of Fame tab on the USBA website.  Congratulations to Curt & the entire Schreiner family! 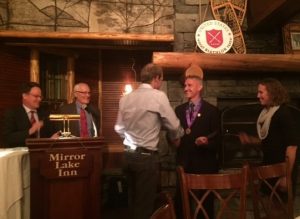 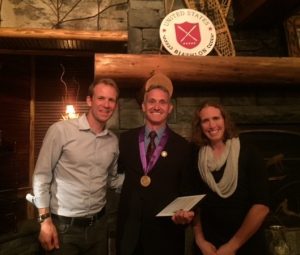