The weather held out for the races on both Saturday and Sunday. Conditions were near perfect on both days. On Saturday Mike Wynn (Peru Nordic) claimed yet another Great Sacandaga Mini Marathon Title. Matt Forshey (HURT) just beat Matt Torniainen (Adirondack Vauhti) for second place. In the Micro Marathon (15 km), Mike Tuthill (Paul Smith’s) and Karen Domas (Paul Smith’s) took the top honors.

Sunday featured two biathlon races. The first race was the Spring Biathlon Relay, which features teams of two alternating laps. In the Men’s division Brian Wieghaus and Joe Iwan had only 3 penalties (25 shots) to take the win.  Doug Diehl and Jeff Lintz finished second, and the team of Darrell Rikert and Tom Bielli finished third. In the mixed division, the brother-sister team of Erik and Katrin Schreiner easily cruised to victory. In second place was the team of Tom and Marque Moffett. Rounding out the podium were J.J. and Shannon Valera.

The final race of the weekend was a modified biathlon mass start. This short race featured two 1.4 km loops, followed by a 300 m loop. Doug Diehl took first place, followed by Joe Iwan and Brian Wieghaus. Magali Haas won the women’s race, and the award for the best finish of the day for outsprinting three time Olympian Curt Schreiner to the line.

The skiing is still really nice, and should be good for the next couple of weeks. Come out and enjoy some great spring skiing. There will be a potluck dinner on Saturday, we hope to see you there.

Due to the freezing rain forecast for tomorrow morning we have delayed the start of tomorrow’s race. Registration will now open at 11:00 and the race will start at Noon.

We will be holding the Great Sacandaga Mini Marathon on Saturday. This is a 30 km freestyle cross country ski race. There is also the option of registering for the 13 km Micro Marathon. Bib puck up and day of registration will open at 10:00 AM. The race will start at 11:00 AM. The start will either be waves or a mass start depending on the number of athletes registered. The entry fee is $25 for pre-registered, $35 day of race. Pre-Registration closes on Friday at 6:00 PM.

Pre-Register for the Mini Marathon

On Sunday, we will hold our annual Spring Biathlon Races.This is a fun event to close out the racing season. In the race two person teams will compete, by skiing alternating loops of 1.4 km. There will be two divisions, Men’s (two men on a team) and Mixed (at least one woman).

You can register as a team, or as an individual. Individuals will be paired up the morning of the race, before zero.

Pre-Register for the Spring Biathlon Races

All competitors must have completed a prior safety clinic.

Format of the Race:

After the relay races we will hold a short mass start biathlon race.

The 2015 Great Sacandaga Mini Marathon has been postponed due to the dangerous wind chill forecast for tomorrow. The race will be rescheduled for the either March 14th or 15th (most likely the 14th.)

A decision on whether to hold the Great Sacandaga Mini Marathon will be made at 3:00 PM this afternoon. There is a dangerous windchill forecast for tomorrow. Current projections are for a windchill of -20 to -35 oF at race time. If the forecast does not improve we will postpone the race. The new date for the race will be Saturday March 14, 2015.

Check back here for a final decision this afternoon.

The club has received several feet of snow in the past couple of weeks and is primed to hold Sunday’s Great Sacandaga Mini Marathon. There are two race options, 30 km (4 loops) and 15 km (2 loops).

Also on Saturday, we are hosting the Shenendahowa Classic, for those who like to classic ski. This is an event run by the Shenedahowa Nordic Club.

The weather was colder, and the tracks a little slower as an inch of powder fell overnight. The results however looked just like the day before, with repeat winners in both the men’s and women’s races. Matthew Forshey (HURT) won today’s pursuit race by nearly three minutes over second place Tom Moffett (Saratoga Biathlon). Sean Halligan (Saratoga Biathlon) finished in third for the second day in a row.

The next events at the club will be the Shen Classic on Valentine’s day and the Mini Marathon the following day. We will be holding one more biathlon race, an individual on February 28th.

We will be holding two biathlon  races this weekend, a sprint on Saturday (all classes will race 7.5 km), and a pursuit on Sunday (10 km for all classes except boys, girls, and novice – 6 km). There is good snow coverage and conditions are expected to be fast.

The schedule for both days:

The entry fee for each race is $20 (payable at bib pickup) for pre-registered. Pre-registration will close at 6:00 PM on Friday. Day of race registration will be available ($30). All competitors must be a member of the USBA or Biathlon Canada. Non-members must purchase a $10 member for a day. 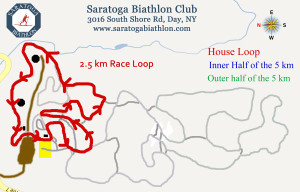 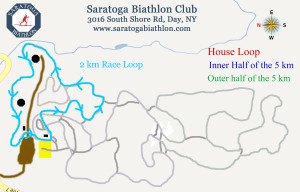 Conditions were perfect for the last biathlon races of the season, with cold temperatures and fast snow.

The father-son team of Sean and Brian Halligan won the two person alternate lap Spring Biathlon Relay Race on Sunday. Skiers traded off skiing a 1.4 km loop, tagging after the penalty loop. The first skier shot prone, prone, and standing. The second skier shot prone and standing, thenn skied to the finish on their last loop. In second place was the team of Doug Diehl and Eric Seyse. Darrell Rikert and Joe Iwan took third.  In the mixed division, former Olympians used superior shooting (hitting 21 out of 25 targets) to ski to an easy victory over Tom and Marque Moffett. Pat Clancy and Ann Seyse finished in third.

Following the relay races, competitors lined up for a mass start race, that featured a number of innovations which I’m sure you will see in World Cup races soon. The race started with a Le Mans start, with skiers running to their skis and poles. The race was four laps, with skiers shooting prone, standing, and then their choice of prone or standing. Skiers had the option of using relay rounds for the last stage. Brian Halligan took his second win of the day, followed by Eli Walker, and Sean Halligan.

The skiing is not done for the year, we plan on holding a cross country race the first weekend in April. Comment on our facebook page what day work best. The format of the race is to be determined, but should be fun.

Basia Smolinska posted a video on our facebook page of the Le Mans start:

We will be holding a two person biathlon relay on Sunday March 23, 2014. The format of the race is as follows:

After the relay races we will hold a short mass start race (or races depending on how many people want to do it),.